Born into the Fairfax media dynasty, he inherited power, money, and privilege, yet never lost sight of the importance of service, and giving, and always remained true to himself.

He is best remembered for his vital contribution to independent journalism, his extraordinary art collection, and his equally extraordinary philanthropy.

The James Fairfax Foundation was established in 1999 to provide a philanthropic vehicle by which James’ generosity, noblesse oblige, and life-long desire to help others would continue long after his death.

James lived a life of contribution and meaning that is a shining example to us all.

His eponymous charitable foundation aims to continue his generosity in perpetuity, for the benefit of all Australians.

Who was James Oswald Fairfax? 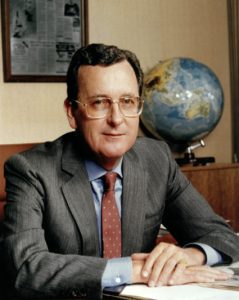 James Fairfax was the direct-line great grandson of the original John Fairfax (1804-1877), a publisher who emigrated from Warwickshire in England and built up the Sydney Morning Herald, which was founded in 1831, owning it outright by 1841.

The family controlled and expanded the company for 146 years, selling it in 1987, by which time it included an extensive network of television, radio, and local newspaper titles, as well as major Australian mastheads the SMH, The Age, the AFR, and the Canberra Times.

James was the 5th (and last) descendent to hold the position of Chairman of John Fairfax Pty Ltd.

He was also a noted philanthropist, art collector, connoisseur, traveller, and dog-lover. He was awarded an AC in 2010 for eminent service to the community through support and philanthropy for the visual arts, conservation organisations and building programs for medical research and educational facilities.

The eldest son of Sir Warwick Fairfax and (Marcie) Elizabeth Wilson (known as Betty), James was born into privilege, but his sense of generosity was legendary, and he donated to many worthy causes throughout his life, many through his holding company, Bridgestar Pty Ltd.

On his death, James’ Will gave instructions that the capital of his Estate would, over time, be held entirely by the Foundation, in order to create income solely for charitable organisations, in perpetuity.

We are unable to accept unsolicited requests for gifts.